After 10 hours of sleep, I woke up quite refreshed with very little remnants of jet lag thankfully.  And I guess watching the sun rise over the city helped me arise with an extra skip in my step as well… 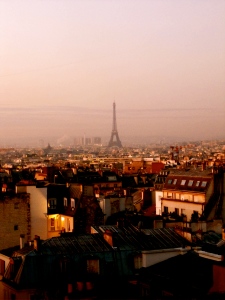 We began the day at a different little cafe with an excellent breakfast, then headed immediately to The Louvre.  (I just realized that I haven’t exactly clued you into who ‘we’ are – Andrew Lyon, Nathanael Lyon, Kimberly Majeski, and I are taking Paris by storm these 2 days – Kimberly and I are meeting the 4 other members of our team in Beirut while Andrew and Nathanael continue their European week-long trip.)  Anyways, we got extremely lucky because the sun was out this morning while we waited in line for the Louvre, which allowed for some good picture taking conditions!

The Louvre was incredible!!  We only ventured into about 25% of it during our 4 hour stay.  Kimberly gave us an unexpected but great history lesson on pretty much every Roman statue we saw, which was nice to have our own personal tour guide during that area!  And of course we saw the Venus de Milo, Mona Lisa herself, Ramases, and the Code of Hammurabi (oldest recorded written law) as well as the Italian and French paintings.  It is true that you could stay a week in there, and I wish we could have.  My favorite part however was exploring the apartments of Napolean III – it felt like I stepped directly into the Marie Antoinette movie!

Afterwards, we had crepes at a cafe, stopped briefly at a street vendor to get a ring for me (the only souvenier of our fast and furious trip besides an ornament from Notre Dame), and then we came to the Notre Dame Cathedral – all singing the ‘Bells of Notre Dame’ from the Hunchback as we approached – haha.  As to be expected, there just are not words to encapsulate the beauty and grandeur of it!  Inside, there was the sound of a choir filling the air, and awe overtook me.  Every time I go inside of a grand cathedral, I cannot help but looking up – and I wonder if that is a part of the reason for the immense size of these buildings – to cause you to look up – to not have all of your focus held solely on the people conducting the service, but to look up hopefully past even the breathtaking architecture – to somehow stir an awareness of the grandness of God and therefore cause a desire to want more.

The next destination was strolling down the Champs Eleysees on the way to the Arc de Triomphe. 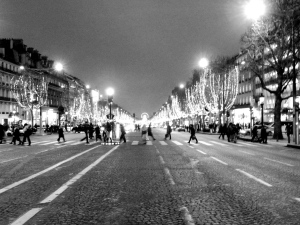 Finally, we were ready to experience the one and only Eiffel Tower, although not without stopping for a Nutella and banana crepe from a street vendor (with whom I made friends and we had a brief dance party! ha).  It truly is as remarkable as I expected it to be. 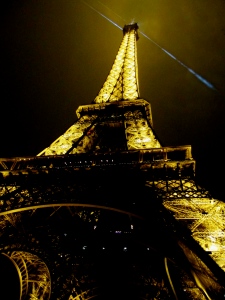 After some group photos, Kimberly headed to the cafe where we would later have dinner while Andrew, Nathanael and I prepared to ascend to the top of the tower.  However, we were quite disappointed to find out that the top third floor was closed due to renovations.  But we still pressed forward, and even decided to take the stairs! 696 stairs to be exact to the second floor, and it really was not that bad and I would definitely take the stairs again.  But the best surprise of the trip met us as we arrived on the first floor – an ICE SKATING RINK!!! 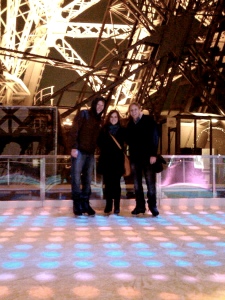 There was a small ice skating rink inside of the Eiffel Tower, where you could skate for free – complete with a refreshment stand made completely out of ice and techno music and lights!!!  Truly a once in a lifetime experience (there is a video on my Facebook page as well)!  We made it to the second floor and took some photos just before the rain came, and we decided on the elevator rather than the stairs sadly due to that.

Our last event in Paris was a three hour dinner at a great cafe, where I enjoyed an amazing Croque Madame and Creme Brulee.  We laughed and shared stories until we finally made our way to the hotel for a few hours of sleep before Kimberly and I made our way to Beirut.

Baby Crider is a GIRL! 💜
I love watching this man be a father and witnessing how much our kids look up to him in every way (though Aiden is convinced he will be taller one day!).
Our preschool graduate! 🎓😭
Obligatory beach sunset photos and a few other snapshots from our time in Orlando with Nani and Papi! So grateful!
I am the planner, and @scottkcrider is the more spontaneous one. I am so glad he won this time in having us do a last-minute day at the beach on our way home from vacation!
Getting a perfect picture of our kids is about to get even more wild when we welcome a new baby early November!!👶🏼🎉