What better way to start off the day than a little float in the Dead Sea??  Perfection!

We arrived back in the land flowing with milk and honey late the night prior, not allowing us to experience the indescribable sensation of floating in this unique Sea until this morning – which was probably better.  We arose at dawn, and a few of us girls first made our way to the hotel’s Spa which had a heated indoor pool filled with water from the Dead Sea – it was open for an hour in the morning for women only, so we joined the local women in this relaxing past-time – however we stuck out like a sore thumb being among the few women not dressed from head to toe in burkas – an interesting experience.  Then we wandered a few minutes down the road to the actual Dead Sea and enjoyed the beach practically to ourselves with the sun beaming on our excited faces. The water was a pristine blue, and although the water was a bit chilled, we loved it!  You should definitely add this to your bucket list! 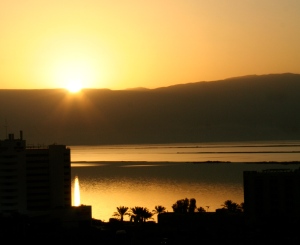 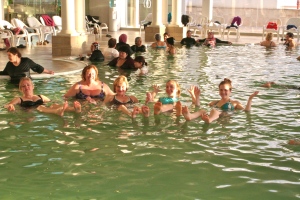 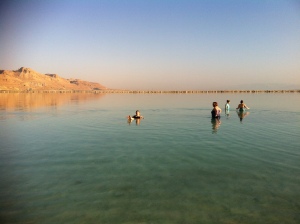 After being thoroughly refreshed, we loaded the bus and made our way to Masada, which definitely became one of my favorite sites of ruins from the trip.  To give you an idea of its scale, I snapped a shot of this painting … 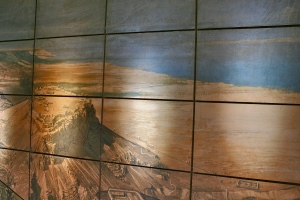 This ancient city built on top of a massive rock plateau overlooking the Dead Sea was fortified yet again by Herod the Great (it is truly unbelievable how much Herod did in his lifetime – although he clearly thought the ends justified the means, leading to his nickname of the 2 B’s – the Butcher and the Builder as aforementioned).  However, Masada is most known for its bloody final stance by the Jews as the Romans were about to seize the city.  According to Josephus, the Romans surrounded Masada on all sides and built a ramp to ultimately lay seige on the land. 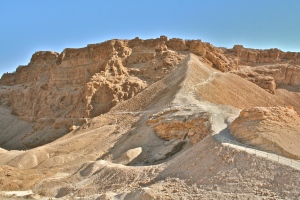 But when the Romans finally breached the fortress on April 16, 73 CE, they discovered that the 960 inhabitants commited a mass suicide because they would rather die free than live as a Roman slave – supposedly the men killed their families and then drew lots (which were found) for the man who would ultimately kill the rest of them – a very sobering story.

We ascended to the summit via a cable car, and then soaked in the sites as we tried to imagine what life would have been like in this ancient city. 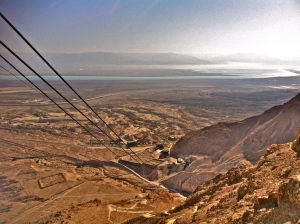 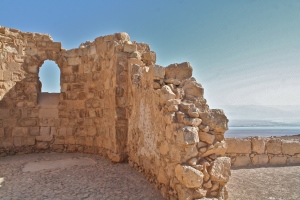 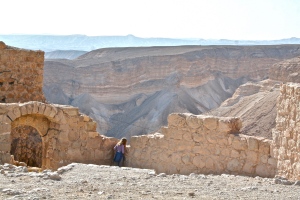 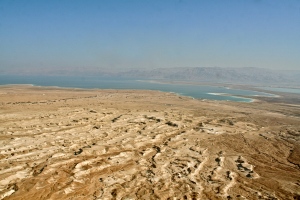 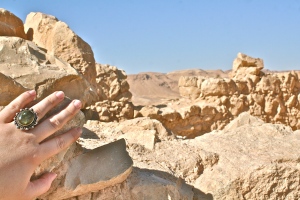 Yet again, I could not help thinking about the story of these stones – what they held when Herod’s Palace was built on this summit, when the people felt safe within the fortress and went about their daily lives unafraid, when the Romans were slowly surrounding and reaching closer and closer to the top, when the men decided to commit a mass suicide, when some of the children couldn’t understand, when the last man stood and took his own life, when the Romans breached the walls and realized what had happened… such stories in these stones – a repeating theme of this trip that will probably only continue.

To lighten the mood a bit after our time at Masada, we experienced incredible hospitality and one of my favorite meals of the trip at a Bedouin village that was built to show what an ancient Bedouin village would have looked like. 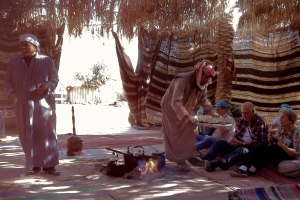 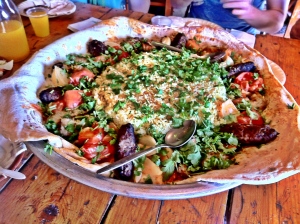 And did I mention we had some fun riding camels? 🙂 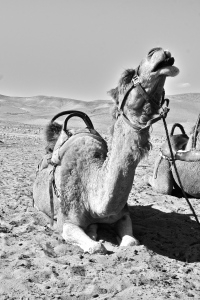 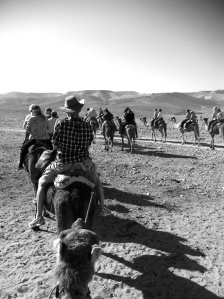 Over lunch, Kimberly and Pastor Lyon recored a soon to be aired CBH program focusing on the link of the Bedouin hospitality to that of Abraham’s hospitality to the three visitors in Genesis 18.  Being in this place absolutely makes the stories I’ve read for so long come alive – I am eager to begin my seminary classes with these scenes fresh on my heart and mind.  As Pastor Lyon said on Sunday night, for some reason God chose to reveal Himself on this very land – and I’m realizing how important it is for me to understand this place and the framework of the culture when diving into the study of the Word.  So often it is easy to clothe the Scriptures in my modern day Americanized concepts of what they should look like – and although the Word is just as applicable to my life today as it was when it was written, knowing and seeing the background of those life-changing words breathes new life onto them, especially onto scenes that have previously been easy for me to overlook.

And the above statement will guide these next three days, which will be spent in Jerusalem as I try to take in the sites of the city with all of my senses – it feels appropriate that Jerusalem is our last destination – as if everything else was leading up to this.

Happy Birthday to the girl whose vibe cannot be stopped even if she’s been sick all week (Hand Foot Mouth for the third and worst time 🥴)!
✨ The magic of childhood and a lazy Saturday together ✨
“You can be brave and scared at the same time.”
Traveling with kids is so hard, but it’s also so worth it!
Although I questioned myself a lot before becoming a mother, I never spent a split second wondering if @scottkcrider would be an incredible father!
Just a chubby tank top baby to brighten your feed 🌟
Join 83 other followers