Greeted by the sun pouring into our stone-walled room this morning, I awoke with much expectancy for the trip ahead to Tyre and Sidon.  However, after beginning to get ready, something diverted my plan slightly – the feeling perhaps akin to a circus troupe of miniature acrobats performing some remarkable tricks in my belly – it was bound to happen to one of us, but I was the lucky one with some sort of minor stomach virus 😦  But I refused to stay back, especially on a day like today.  So after a brief delay, we all packed into the MBC van and pressed forward – stopping for some heavy duty meds on the way which thankfully helped!

We stopped for breakfast in Sidon at perhaps my favorite food stop yet – a magical land called Al Baba! Ha.  It is a sweet shop with pretty much any Lebanese treat one could want!

But due to my tummy troubles, I just had water.  Although, John (whom Kimberly and I have nicknamed Daddy Warbucks because he is carrying all of our group money) decided to get a sampler platter of chocolates, miniature pastries, and other yummies, which I cannot wait to try tomorrow!  (I told you we are having a bit of our own Eat, Pray, Love journey :))

When we arrived in Tyre and came to the ruins, I was nothing short of overwhelmed. 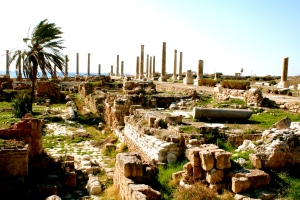 If I thought that I could hardly take in the history on the streets I was walking in Paris, I was not remotely prepared for this as I stood among ruins from a city founded around 2750 B.C.!  Even as I type this, I can hardly believe it.  In my feeble and inadequate young American girl’s language, all I could exclaim was, ‘Wow!’  Being enveloped by the sun gently warming our faces, the aroma of the Mediterranean Sea breeze, and the stories spanning millenia on the very worn stones beneath our feet was almost too much to take.

As we approached an amphitheater, we all gathered as Kimberly read the stories from the Bible that found their setting in Tyre – about Jezebel and King Ahab in 1 Kings, Jesus in Matthew 15, and Paul in Acts 21.  Joy showed us where Jesus would have walked – in the picture above, He would have walked along the shore from the left and up through the collums marking the main road.  It was surreal.  And I was truly speechless.

We ventured down the main road which would have been the market area full of shops, passing the famous baths to the left, and coming to the beautiful Mediterranean Sea where a man bearing a toothy smile was offering us ‘ancient’ relics and shells from the sea (and we bought a few).  And again, I gasped, ‘Wow!’ as I looked back on the ancient city.

Next we came to the Hippodrome amid more ancient ruins, where many sports would have taken place including chariot races!  Kimberly and John recorded a bit for a CBH broadcast, while I got the wild notion to run a lap around the grassy track.

After I finished, I realized it was perhaps not the greatest idea as I was still feeling under the weather – but perhaps adrenaline got the best of me as I thought ‘When in Tyre at the Hippodrome…’ Ha.  However, I later found out an extremely sobering fact that would have completely prevented me from running around the track – in the center of the Hippodrome, a monument was erected called The Church of the Martyrs (after the Hippodrome was no longer used) because in that very track, the early Christians used to be persecuted and killed in addition to the chariot races and other sports.  Again – speechless.  As Kimberly wrote in her blog, it is “a reminder of the juxtaposition of the rise and glory of the empire and the fierce fires of persecution for the early church.”

After experiencing such rich, surreal, and sobering history, we went to a quaint restaurant called Salina’s with a view of the Mediterranean Sea where we had fried freshly caught fish – or ‘fish with face’ as Kimberly liked to call it!  This was the best picture I got…

I did have a bite, and it was pretty good!!

After dinner, we were able to sit outside on the coast of the Mediterranean as the sun slowly began to set, and I could have stayed there forever!!  Perfect weather, crystal clear water, full heart. 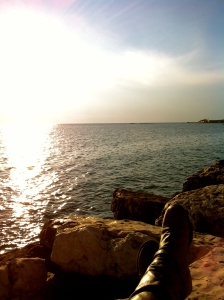 On our way back to Beirut, we stopped at an ancient castle in Sidon to snap a few photos.  And once in Beirut, we killed some time at the mall while Joy led his Bible Study group.  We made a Haagan Dazs stop in honor of Jim Lyon, and then Kimberly and I enjoyed some quality time with our good friend H&M 😉

A great day – sick and all – and I will never forget walking where Jesus walked in Tyre!

Last night was our final Wednesday night with @christchurch.yth, and I could not be more proud of @scottkcrider and all he has sown into this group over the last decade (6 years as youth pastor and 4 as a volunteer before that).
We realized today that I have known this amazing woman for over half my life!
New seasons all around as it became clear it was time to wean Chloe this week, which is also bittersweet in its own right.
Big news from the Criders!
Happy Birthday Chloe!!! 🎉1️⃣🎂🥳
Happy Birthday to the girl whose vibe cannot be stopped even if she’s been sick all week (Hand Foot Mouth for the third and worst time 🥴)!
Join 83 other subscribers